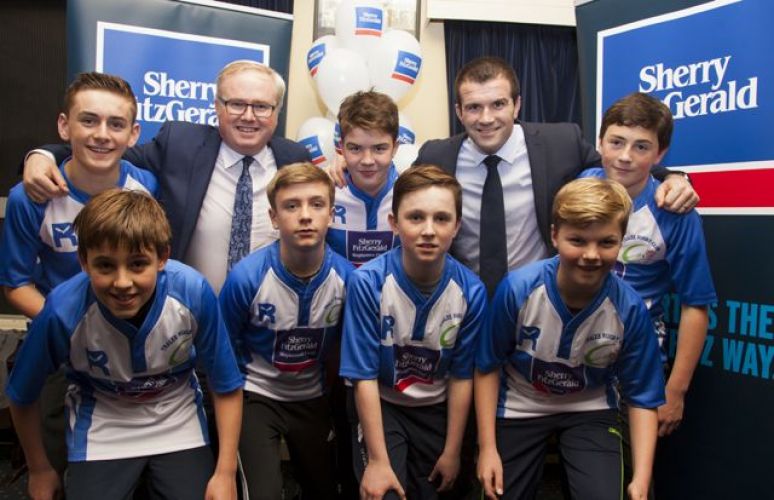 YOUNGSTERS from Tralee Rugby Club had a pre-Christmas treat on Wednesday when a former Irish star showed up at the clubhouse.

Shane Jennings, former Irish International and Leinster legend was there to present jerseys, sponsored by Sherry Fitzgerald Stephenson Crean of Denny Street, to the entire Under 14 squad.

“We are absolutely delighted to sponsor the Under 14 squad here in Tralee RFC,” said Paul Stephenson of Sherry Fitzgerald Stephenson Crean. “I have coached this age group in their formative years and now it’s great to be able to join forces with the club and assist this squad in any way possible.”

The former Irish player said it was a pleasure to be at the club.

“I was delighted to be able to call here today and meet all these young players and assist Paul to present the jerseys,” said Shane Jennings. “Considering the weather was so bad it was great to meet such a large group of young and very enthusiastic players.”

“We are thrilled to have Paul and his company on board as sponsors to the under 14 squad,” said Jeremy Walsh, Chairman of Tralee RFC. “It was a great occasion to have Shane Jennings to meet all the players and present the jerseys.”

Sean Kelly, President Tralee RFC, presented Jennings with a club tie and said; “It was a honour to have Shane Jennings visit the club today…hopefully we will see him again in the not too distant future.”