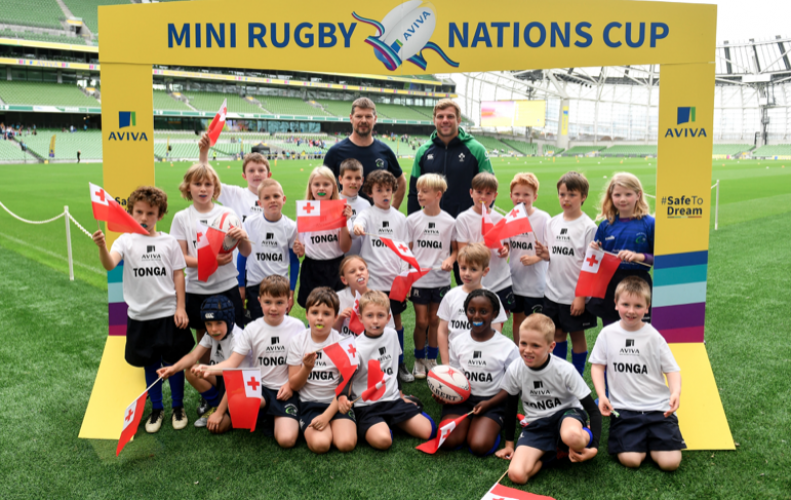 Written by: Dermot Crean for Tralee.ie

AS rugby fever hit epic levels on Sunday after Ireland’s win against Scotland in the 2019 Rugby World Cup, it was all about the future stars of rugby back home in the Aviva Stadium as 20 teams from rugby clubs around the country took part in the Aviva Mini Rugby Nations Cup.

Tralee Rugby Club was one of the lucky clubs to win a place at the event, with each team being given the chance to pull on jerseys of rugby nations competing in the Rugby World Cup in Japan.

The lucky group of 21 under 10 boys and girls who travelled from Tralee to Dublin on Sunday had a fantastic day representing Tonga, competing in four matches against Russia (Tullamore), Uruguay (Enniskillen), Samoa (Ballina) and Georgia (Cashel) on the day.

Ireland international Jordi Murphy was on hand to meet and greet players and all teams got the chance to enter the West Stand and lift some specially commissioned trophies.

The festival spearheads Aviva’s #SafeToDream campaign, which celebrates how kids’ dreams are the same as their Ireland rugby counterparts.

Following on from the success of this weekend, Tralee Rugby Club are holding a special open day on Saturday morning at 10.30am to encourage children aged between 6 and 12 to come along and give rugby a ‘try’.

All families are welcome to come along for this fun and friendly event to meet the coaches and learn more about all that Tralee Rugby Club has to offer. For more information contact Declan Smith on traleerfcminisection@gmail.com